My One Thousand Gifts 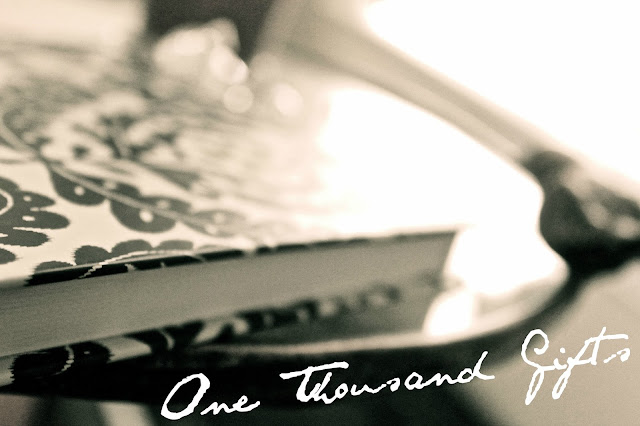 A dare to live life fully.

Right where you are. 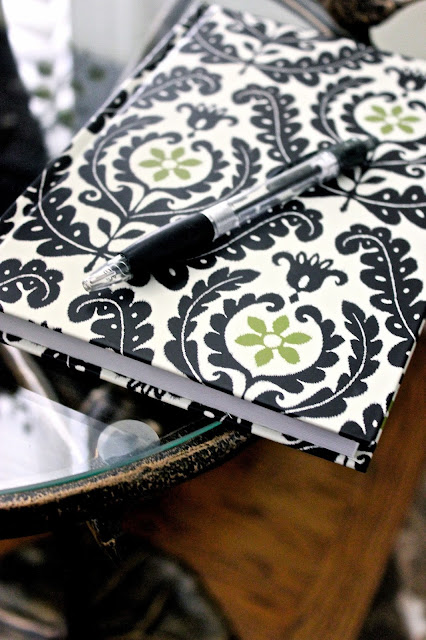 Recording again, that is.

I've always considered myself someone who loved to write and give thanks (not to say I was good at it . . . ). When I was little, I'd lock away and dream about being a writer. :p I "published" my first book at the ripe old age of 7. 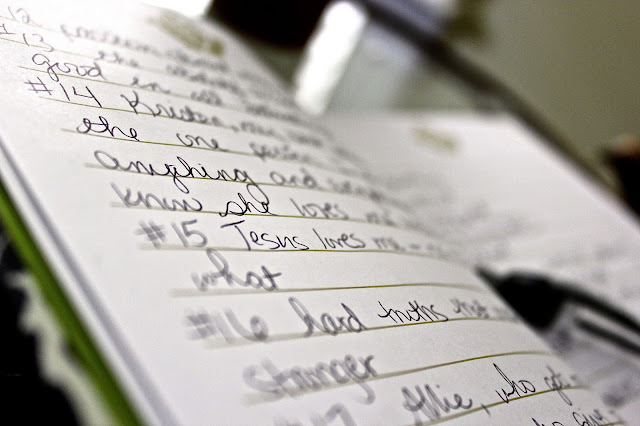 In former days (not too long ago), I'd wind down the day processing the events, trying to grasp the meaning and gifts God had in it all for me -- expressing myself through writing.

I stopped, though. For some reason or another, and I've failed to look up like I should. 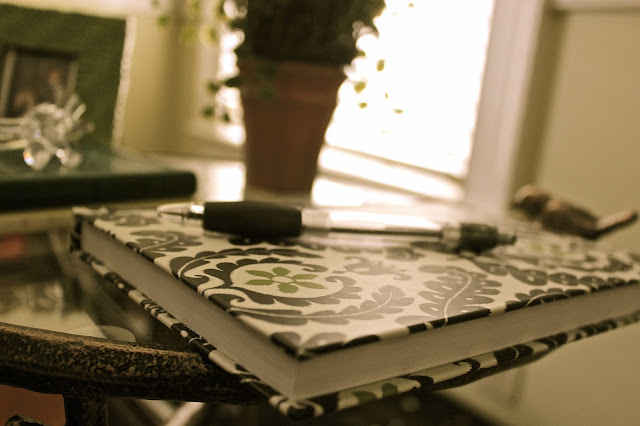 I am giving thanks.

And, I will remember the great things God has, is and will do in my life!

Guess what?! It changes your whole perspective and makes life so much more enjoyable!!! I'd recommend you giving it a try. :)

Will you join me? Let's make a choice, like Ann Voskamp encourages us-- to be grateful for what we already have so we're ready to receive the future. :)
Posted by Katherine at 9:15 AM 5 comments: 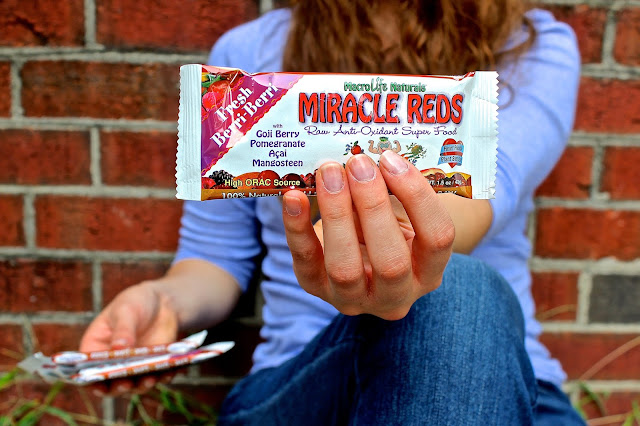 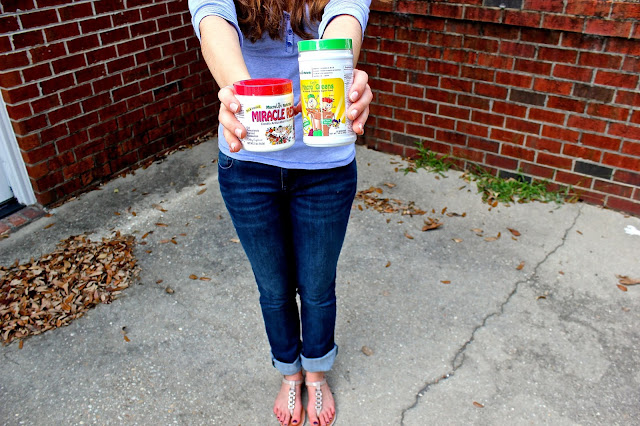 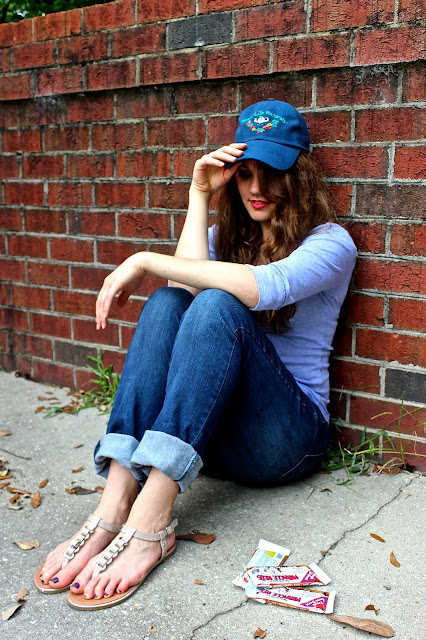 Winner will receive a sassy blue MacroLife Naturals hat to sport around town (or where ever you live. :p) 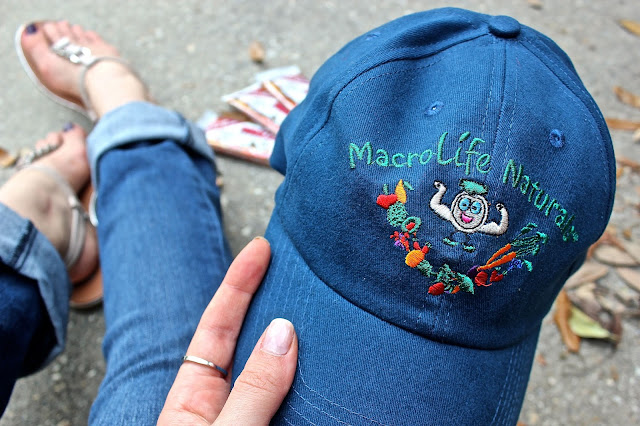 This is what the hat it looks like up close. :)

Rock your healthy! Isn't that little mushroom (onion, or whatever he is!) t-totally adorable?! 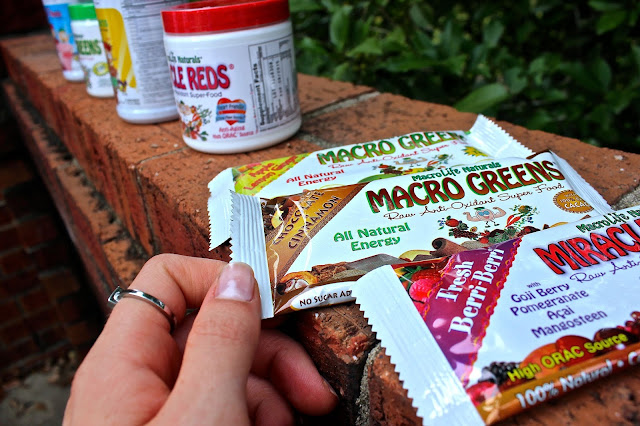 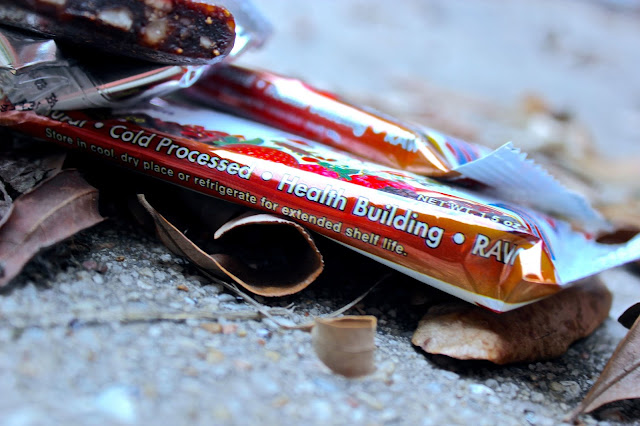 a Rafflecopter giveaway
Posted by Katherine at 9:22 AM 4 comments:

Which to Choose-- Bitter or Better? {Part 1} 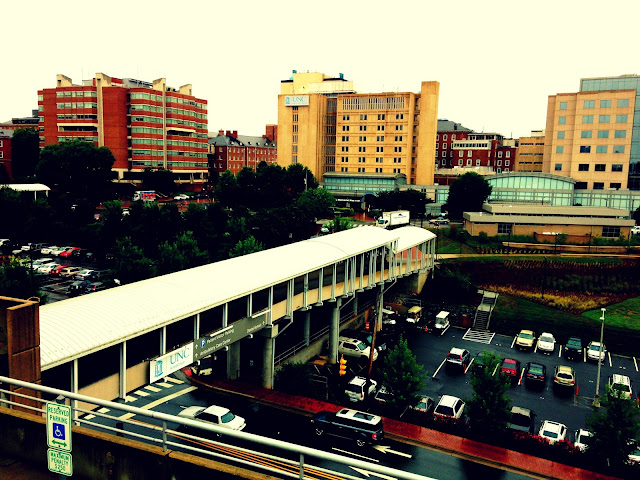 Ok, guys- I'm saying it. After 2 years of watching my mom fight in the trenches (on the winning side!), I'm not as easily convinced when people say, "I have a cure for cancer".

And, I have to say it makes me really upset when people casually imply, "If you'd just do this than your mom would be fine and you wouldn't be going through this" (like they know everything . . . ).

Maybe it's because I've taken the advice and done my best to help Mom do it (along with countless doctors!) and I know it's not that  "simple fix" like they implied. It's work, and it's hard!

Or, that really "kind-hearted" person who comes up and offers another "cure" to the health issue... and just talks, doesn't listen... and their every word feeling like a dart to the heart because on the inside -- you're so numb and hurting from working really hard and wanting to be sssooo done with this. Really you don't need their latest "un-researched medical advice"... you need a hug, an (nonjudgmental) listening ear, and a continued smile that says, "I believe in you."

Really? You have all the answers?

And, don't get me wrong- I really want to believe these well-meaning people! It's just I I feel like they don't understand and they come across as slightly arrogant to me.

Maybe that's judgmental of me.

Maybe it's just where I am and it'll pass?

They say it like it's a quick fix when it's extremely complicated. And, - - - - they're not the ones that have sat through the day-long appointments, taken off work, lost sleep and felt totally awkward in situations when your heart tries to make a desperate escape through your throat and you're left not able to talk in a puddle of tears about all of this . . .

If you knew how my family has banded together (we're stronger for it, though), the investment in a gazillion natural supplements (literally) , the hours and hours (up to 10 x a day) we've spent juicing (not to mention research), the surgeries, the traditional treatments mom's endured and the hospital stays that we've supported her through, the exercise regimes, oxygen therapy, rebounding, the infrared saunas, bio sodium carbonate, essential oils, raw diets, routines, mediation, prayer, fasting, the whole lot all with a smile (or mostly :p)  --- ya might not be so quick to judge.

So, you have a cure for cancer?

Great- I hope you're right!

The world needs one.

Please tell me if you do, but show me the research.

Show me the science.

Someone recently told me that Gerson Therapy is 12% success rate.

Not good enough. I'm not saying that people haven't been saved by it, but I just think it's rather unwise to stake your life on an entire theory that has an 88% of not working. :/

Of course, I'm not saying chemo is much better. {I think the average is 60% survival rate for anyone who gets cancer.}

I am by no means giving up.

Mom's a fighter and that's all there is to it. I'm 100% behind her (as are all of you are, I'm sure), my rock solid dad, and 8 sibs to boot and our fabulous friends and extended family who've prayed us through.

Nope, notta chance. :) Quitting and taking a breath are just two different things, and I'm learning to distinguish. :p This post just means I'm trying to communicate and not lock up.

Lock up, that is.

Just nodding your head "yes" when people ask you if "you're fine" in attempt to push out the pain (when what you really feel inside is this ache of uncertainty and almost a sort of trauma from seeing everything that can happen from disease, and then the pressure to constantly sift through the hype for the next best thing.)

I'm ok, though-- because God is good.

But, I won't pretend - I don't understand.

Just trying to keep reaching out and recognize that it's alright to feel overwhelmed, upset and even angry -- just as long as I don't stop there. :)

There's a part of me that really wants to minister to people who have a family member that's going through a fight with cancer and then there's another part of me that wants to scream it away and never think about it again. 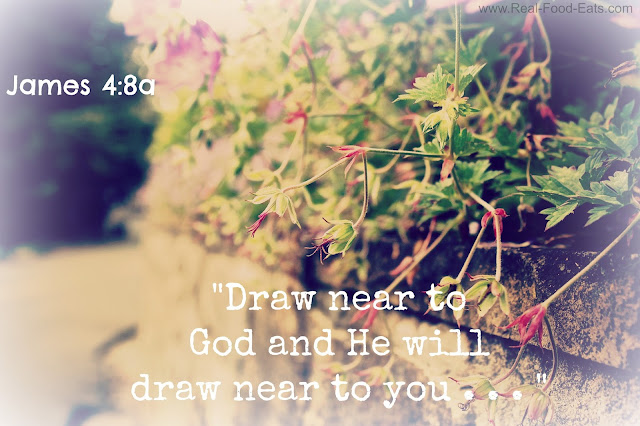 The past couple of days I've felt numb, but also extremely grateful. God's been reminding me that I'm just a vessel and not the source.

I was pacing outside the hospital yesterday morning feeling completely unable to handle this and it was like God spoke to me and said, "Katherine- stop trying to do this in your own strength. I'm here and I love you."

Seriously, my Mom is 10x stronger than I am.

I've never, ever seen her break down. Not once. Isn't that amazing?! I feel like it would be better if she'd just let it out, but I think God's just given her a special grace to deal with all of this.

It's late Monday night. (or rather early Tues) now -- I'm out of town because our local hospital is less than desirable and my Mom is on her 2nd night with hope to be released tomorrow. = )

I read a fabulous book 2 years that's helped me a ton. It's called The Land Between which I highly recommend for anyone who needs encouragement during a tough time, and is searching for meaning.

After saying all that-- I should most definitely mention that I believe my Mom will be completely healed. And, Mom believes this more than anyone which is what matters most. :)

So, when tough times come- we find out what we really believe and it's bitter or better. Which one are you choosing?

Thank you guys for being ssoooo supportive! And, for listening to 'my spill'! :p

Planning to post some vids soon that are helpful for cancer prevention!
Posted by Katherine at 12:37 AM 2 comments:

Summer at It's Best 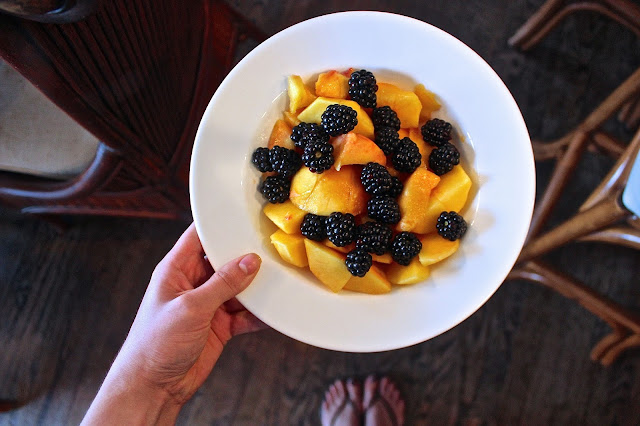 What are your favorite summer fruits? How do you like to prepare them? Eat 'em plain or use a recipe? :) 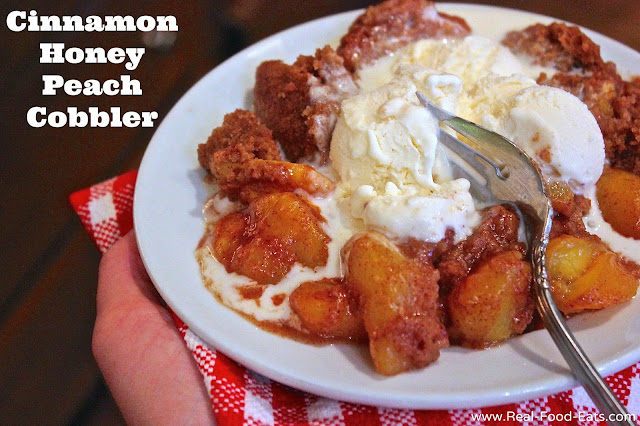 Inspired by a ripening box of juicy peaches and a recent cozy / rainy Saturday evening -- I got on Google, stumbled across Buns in My Oven and went from there!

Pulled up a chair and serve yourself some freshly made cobbler. :) Oh, and bring the ice cream!

Filling directions:
Peel and slice peaches. Drizzle with honey, sprinkle cinnamon on. Add a dash of salt, to taste. Mix it all together! Pour into a pretty glass dish.

Bake at 350 for 25 to 30 minutes or until golden brown. Serve with a scoop of sweet vanilla ice for best results. =)

What kind of person are you --- (A) the cold cobbler type or (B) the freshly made, hot out of the oven gimme a big ole melting scoop of sweet ice cream kind of guy/gal?

This is where healthy meets tasty! Enjoy. :)
Posted by Katherine at 3:41 PM 5 comments: 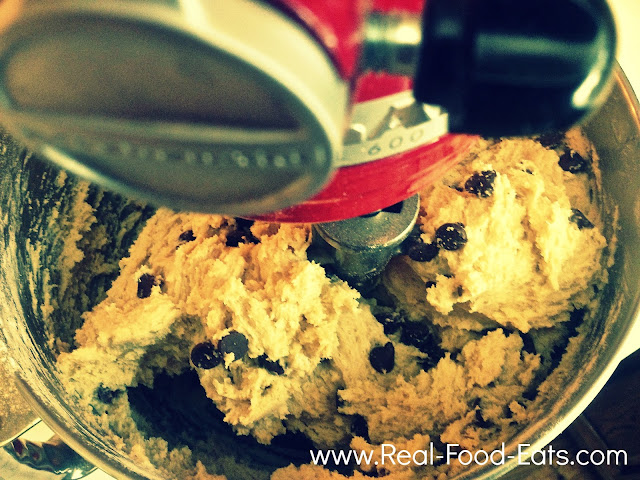 It's a party, folks! My sweet girlfriends are throwing a b-lated birthday celi this evening. :) Games, sugar and lots of laughs will most definitely be present!

I will have pictures for you early next week!

Here's the link to my recipe base! I say "base" because - ya know me . . . I can never stand to stay within the guidelines of a recipe! Gotta step outside the box and be creative. :p Added a hint of almond extract and played around with the sugar - turned out perfecto! =) Just be sure and not overcook them- they're best nice and moist. :)

Have a wonderful weekend everyone -- full of joy, peace and lots of restorative rest to get a ready for Monday. =)
Posted by Katherine at 3:00 PM No comments:

I hope everyone is having a fabulous start to their day!

It's Friday, which means it's FRESH FRIDAY for us!!!

Posted by Katherine at 7:21 AM No comments:

Katherine
Hello, I'm Katherine! I'm glad you're here. :) I like to run, eat, laugh, cry & sigh-- all with a grain of salt! Subscribe to the blog and stay up with the latest. =)
Newer Posts Older Posts Home
Subscribe to: Posts (Atom)

Check Out the Latest Posts! 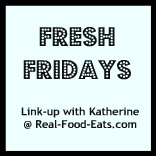 Visit the Sponsor Page on the bar up top!